Stocks Are On A Roll – What Now? Last week was a busy one for me. I had a dinner meeting every evening and there was a resounding theme, both implicit and explicit, in almost every conversation we had – “Is now a good time to add money to portfolios or start taking chips off the table?”

Answer: I don’t know. How could I? But that still does not absolve me from needing to look at things and form some sort of opinion. I thought I’d take a few paragraphs to explain one of the things that has shaped our opinion-making process.

I believe in gathering evidence from an assortment of sources.

Psychology, math, history, physics, philosophy, probabilities, statistics, fundamental analysis, economics, technical analysis – each one its own discipline. Taken individually, they are not very useful in forming an opinion (Unless you are an expert or teaching in that particular discipline). But when taken together and combined with experiences, patterns can be identified, and those can be useful.

With that said, I want to look at a few charts. Admittedly, charts and technical analysis taken in a vacuum are not the tell-all secret to to anything market-related. However, they do show some combined forces at work at the same time.

If you look at these two charts from the latest Bespoke research report, you can see that the S&P 500 has really broken out to the upside.

The first chart suggests there is further upside for stocks. The second is a much longer term chart that goes back to 1928. See those three sidways channels that are highlighted in red? Those are referred to as “consolidations”. There are only three going all the way back to 1928 and we just slogged through one of them. They last a long time. I’m not suggesting that history is required to repeat itself, but it certainly looks positive for the market coming off a consolidation that lasted for a decade…and a half. The good news from my perspective is that we are seeing this uptrend on the heels of some stronger economic data from the past few weeks.

What is the number one bull market in terms of rank? The December, 1987 to March, 2000 bull run. (Trivia: I started out in my post-MBA training program at the old Donaldson Lufkin and Jenrette in August of 1999 and started “live” in January of 2000… perfect timing, right?) That bull market had a 582% return off the bottom. Number three was the bull market from August of 1982 through August of 1987. That return was 228%.

MY POINT: If you were an investor in August of 1982 and you did nothing in the very short (time-wise) market downturn between August of 1987 and December of 1987, you would have been a participant in the first and third ranking bull market runs in history.

Please do me a favor and try to identify the bear market decline that took place between August of 1987 and December of 1987 in the second chart. You can see it, but doesn’t it look like NOISE in the grand scheme of things? This is why you identify the liquidity you need well in advance of needing it, so you stay invested for the long term and not panic during the downturns.

I also don’t think that the individual investor had gotten ahead of themselves too much. Here’s a chart that shows the sentiment survey reading from the American Association of Individual Investors (AAII). When you see the chart, you’ll see a bug move up. In fact, there has been a 19 percentage point move up in this survey since May. HOWEVER, the current reading of 36.9 is still below the bull market average reading of 39.95% and we have not seen this survey report a number above 40 in 37 straight weeks. (Chart from Bespoke) Here are a few reasons that I see for the market being up:

Let’s see how earnings season holds up, but I’m not of the opinion that the market has gotten super expensive. To be fair, it has certainly gotten more expensive and short-term overbought, but the charts below from JP Morgan show that the current Forward P/E Ratios on the S&P 500 are not nuts. In March of 2000, we saw a Forward P/E of 27.2. October of 2007 was 15.7 and now we are at 16.6. If earnings are good, we will see that P/E come down. Also, let’s keep the 25-year average in mind. Below, you can see that the current P/E of 16.6 is nowhere close to being one standard deviation away from the 25-year norm. 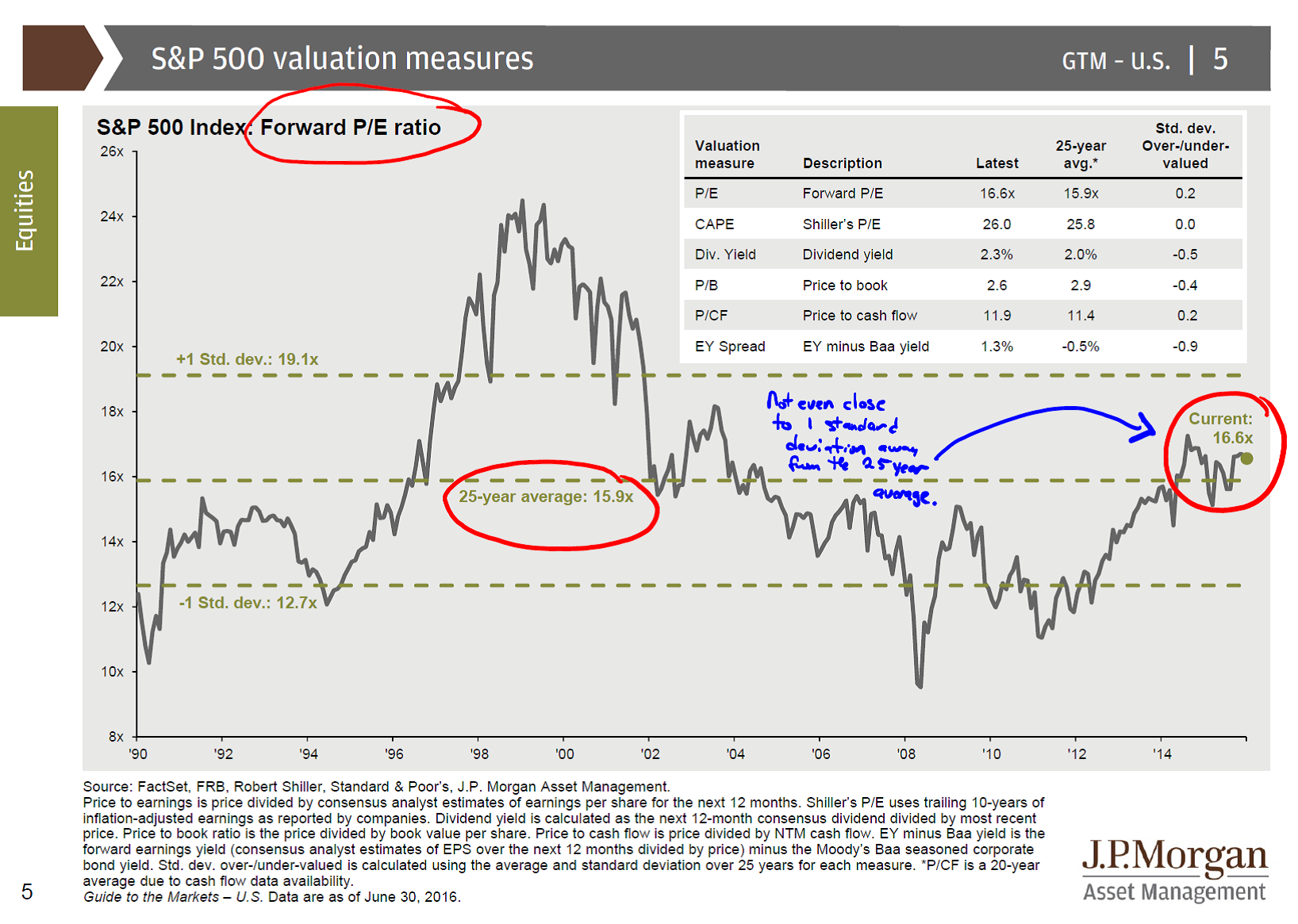 For those of you that point to the fact that the Forward P/E from back in the Tech Bubble was, well, during the Tech Bubble, I will counter with the opinion that I simply do not see any sort of mania developing in the market. Unless you classify Pokémon Go as a mania. For that, you are on your own…I’m not into it. Probably because I have a lot of shit to do…and I’m not 12.

Important Disclosure Information for “Stocks Are On A Roll – What Now?”